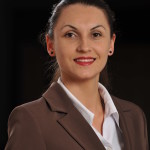 Corina Costescu received her Law degree from the University of Bucharest. In addition, she has received Master’s degrees in Human Resources and Business Law from the University of Bucharest and Nicolae Titulescu University, Bucharest, Romania. After graduating from law school, and prior to joining our team, Corina has worked as an associate at a large and prestigious multinational law firm, in its Romanian office. Corina has extensive experience working with established companies on various legal matters.

Corina is admitted to practice law in Romania and has been a member in good standing of the Bucharest Bar and the National Union of Bars from Romania since March of 2009.