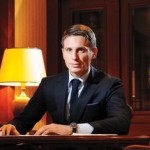 Ruslan Bocancea is an immigration lawyer with significant experience in U.S. immigration and citizenship law. Mr. Bocancea represents clients in the United States as well as overseas at U.S. Embassies. An immigrant himself, Mr. Bocancea has experienced the immigration process firsthand, which enables him to truly understand his clients and their needs.

Before attending law school, Mr. Bocancea served in the public sector, including at the South Dakota Legislature and Attorney General’s Office, and the Minnesota State Senate. He was also an investigative intern at Georgetown Law Center’s Criminal Justice Clinic in Washington, DC.

While in law school and before opening Bocancea Law Firm, Mr. Bocancea clerked at the Federal Defender’s Office and also interned for the Honorable Michael J. Davis and Honorable Susan R. Nelson at the United States District Court for the District of Minnesota. Mr. Bocancea also served as a certified student attorney on behalf of the City of St. Louis Park, Minnesota, where he prosecuted criminal offenses, and also served as a law clerk for a national criminal defense firm, where he assisted with appellate work before the United States Eighth Circuit Court of Appeals.

In his free time, Mr. Bocancea volunteers at the Minnesota International Institute, where he assists clients with citizenship petitions and criminal defense issues, and also interprets for Russian speaking Judges and Presidential Advisors from Russia and former Republics of the Soviet Union, while visiting the Minnesota State and Federal Courts.